Many thanks to the 797 walkers who took part in this year’s Three Peaks Trial! Another huge turnout!

The Charities and Fundraisers who supported the event:
We hope to see you all again at the 2018 event!


The numbers on each route were:

Platinum:  Richard O'Shea (59) from Cwmbran returned in 3 hours 34 minutes after the bus dropped them at Llanthony at 8:30.


Gold: William Fox (55) from Chepstow got back in 4 hours 7 minutes after leaving Abergavenny at 8am.


Silver: David Brunsdon from Cwmbran was first back at 11:26 after leaving Abergavenny at about 8am.


Bronze: Philip George (59) from Gloucester was first back in 2 hours 2 minutes. Oldest/Youngest on Routes:

On Platinum Route the oldest was Clive Cochrane (74) from Abergavenny who got back at 16:35 and the youngest entrant was Elliott Booth (15) from Amersham, Buckinghamshire who returned at 18:05.

On Gold Route the oldest was Mike Laurence (74) from Chepstow who got back at 15:22. Thirteen teenagers also did the walk the youngest being Edryd Lewis (13) from Cardiff who returned at 18:44 whilst the fastest was 17 year old Bethan Lewis from Bridgend who got back at 14:45.

The oldest back on Silver Route was Roger Williams (70) from Newport who got back at 16:14. The youngest entrant was Olivia Taphouse (13) from Oxfordshire who returned at 17:16.

On Bronze Route the oldest were Owen and Lyn Rook, both 65 and from Cardiff who returned at 15:25.The walker who came from the furthest away to do the event was James Matthews who lives in Paris.
Non-Finishers

Of those who failed to finish there were:

The weatherman on friday said "If you've planned an outdoor event this weekend you won't be disappointed" and for once he was right! Sunshine all day.
Posted by Three Peaks Trial Challenge Walk at 21:56 No comments:

Jonathan Prestage, aged 16, from Kent, hopes to raise sponsorship from the event to support the Vine Trust, a volunteering charity which aims to make a real difference for some of the poorest children and communities in the world.

He is planning go on a volunteering trip to Peru in July, with around 30 other students from his school. The purpose of the trip will be be to build and maintain homes for children who have been living on the streets, thus rescuing them from a dangerous and distressing situation. Sponsorship from the event will contribute to the costs of the trip.

Jonathan has taken part in the South Wales 3 Peaks Trial three times before, completing the Bronze Route in 2014 and the Silver Route, twice, in 2015 and 2016.

Jonathan's fundraising page can be found at http://www.vinetrust.org/fundraise/peru3

Posted by Three Peaks Trial Challenge Walk at 14:34 No comments:

Charity Cakes For Sale Just Before Cpt 2 in Gilwern 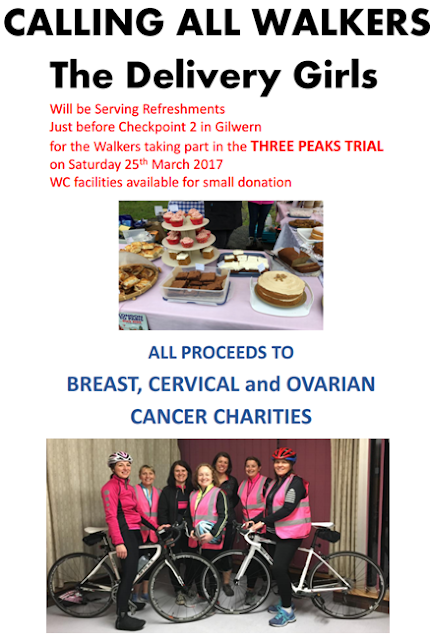 Some friends of participants on the Gold and Silver Routes have a charity cake stall just before Checkpoint 2 in Glangrwyney, at Lower Common about halfway along Glangrwyney road between The Corn Exchange and Glangrwyney bridge. It's a property on the left (look out for the signs). They have a Facebook page called 'The Delivery Girls' and are raising money for Breast Cancer Care, Ovarian Cancer Action and Jo's Cervical Cancer Trust. They serve tea, coffee, hot chocolate and soup, filled rolls and homemade cakes. All proceeds go to the charities. 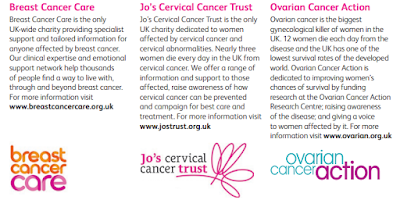 Posted by Three Peaks Trial Challenge Walk at 21:22 No comments: